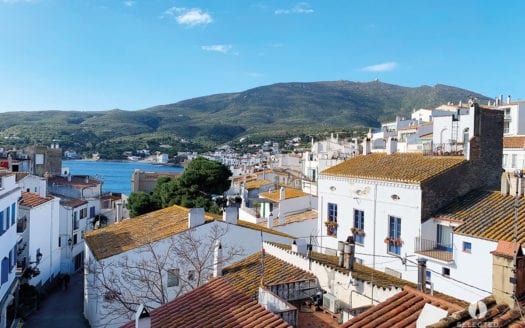 Living in Cadaqués overlooking the sea 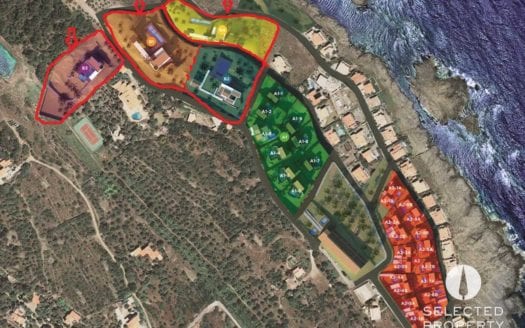 Cadaqués impresses every­one with its special air. Whenever we come to this unique town, we are fascinated anew by the whitewashed Old Town, its warped, huddled buildings and the steep, winding alleyways leading up to a church called Santa Maria.

There, you have a great view over the houses and the sea, especially in the time just before sunset, when a pink veil lies over the picturesque scenery: small boats lie at anchor in the bay, swaying slightly in the breeze, the sea reflects the light of the drowning sun, and the rocks on the shore form a bizarre contrast, framing the white houses and their red and ochre coloured tiled roofs.  Green plants spread over balconies and terraces. One would like to capture the romantic scene on canvas. Perhaps it is the special light, which still causes painters and other creative persons from all around the world to come to Cadaqués. The list of painters, musicians and authors who have come to Cadaqués for inspiration is long. For example, there are Pablo Picasso, Henri Matisse, Max Ernst, André Breton, Paul Eluard, Marcel Duchamp, Man Ray and Gabriel García Márquez. And one should always keep another artist in mind:

The master of surrealism Salvador Dalí never could escape the magic of this speccial place. Most of the time, he lived, worked and celebrated in his house in Port Lligat, which is about one kilometre from Cadaqués. His house lies in a small bay, which is now a hot spot for international visitors.

Salvador Dalí: Genius, an eccentric man and also one of the greatest representatives of surrealist painting is still today a legend. Born in Figueres in 1904 and died there in 1989, he was one of the most famous artists of the 20th century. He was deep-rooted at the picturesque Costa Brava and was inspired in his art by the rough nature, the Mediterranean Sea and the sky of his native coast drawn by the Tramontana wind.

It became clear on that Dalí could and wanted to attract attention. The often extroverted madness could also be well sold. The crazy and, or ingenious artist – however you may see it – often said: “If you want to interest, you have to provoke”.

When tourism started to boom in the Costa Brava, the eccentric painter averted the building of large hotel complexes in Cadaqués and Port Lligat, using his relations.

Thus, Dalí’s white city remained as charming as it used to be, and the church is still the highest building in the town.

Even nowadays, Dalí dominates the city – all in black and white he is enthroned on a huge placard, looking down onto Cadaqués. On cups and smaller placards, and out of display windows, he looks at the people passing by. Appropriate to his ego, nobody will lose sight of him. Maybe he will watch over his city, even in the far future, averting the construction of ugly buildings. Presently, the community wants to enlarge the quayside.

Charming domicile by the sea

If you want to buy a charming home with a sea view in Cadaqués, you have to hurry. Prices are rising, the place is popular with international high society. The range of villas with sea views is limited. Luxury villas, charming townhouses or apartments with sea views in a dream location paired with individuality are a good investment. Cadaqués is one of the best locations on the Costa Brava and on the Spanish Mediterranean.

During the last years many small fashion boutiques, galleries, bars and restaurants have been estab­lished in the alleyways, halls and renovated fishermen’s houses of Cadaqués.  Apart from kitsch and trash you will find exotic jewellery, crafts and arts and fancy artwork by young artists.

The evenings are the time to meet in coffee shops and bars. In front of and in the casino close to see, old and young people meet, tourists and inhabitants of the city chatter unceasingly, and not even the casual crackling of mopeds – property of youths racing through the town – can disturb them.

Dali used to dwell among the guests in a coffee shop called El Jardin, in the middle of exotic plants and under the Mediterranean sky. The jazz club, which is located close to the Ramba, was one of his preferred places to spend the evening, too.  However, we do not know if he loved the tapa-bar at the shore just as much as we do. Still, it is almost impossible to find a place there. We strongly recommend you find your own way through the gastronomy of Cadaqués.

Who manages to get up early in the morning, to drink a first cup of coffee close to the harbour, who listens to the cry of the gulls on the shore and to the steady rhythm of the waves, will find in Cadaqués the enchanting Mediterranean ambience.