Here you can realize your dream of living and making money in the south. The white castle by the sea with extraordinary architecture includes 10 studios and is run as an apartment hotel with sea view of the Gulf of Roses for many years. You can look over mountains and sea in all their splendour. The white peaks of the Pyrenees on the horizon, the azure expanse of the Mediterranean at your feet and the white yachts in the harbour of Roses.

Each guest has his own tower studio with double bed, bathroom, cooking facilities and terrace.

The building includes a swimming pool and a bar with breakfast room. The sandy beach as well as the town center can be reached within only a few minutes. The construction was built with massive walls in the early 70s, following the style of Ibiza and it is situaded in an exquisite and unobstructable location above the sea.

But the last renovation in 2001 requires some brush-ups. The property can also be rearranged into a effusive private refuge or a striking training center. Your creativity knows no bounds – broadly defined like the surrealist master Salvador Dalí, who helped the entire region acquiring an international reputation and left his mark on the close and vast environment.
The property offers plenty of space for visions and can be profitably transformed into the future. With the right idea, at the right time and the right place here is almost everything recovered. Be inspired!

The airports of Girona, Barcelona and Perpignan are within close reach. The high-speed train Paris – Barcelona with a stop in Figueres is almost outside the door, and the motorway approach road Roses provide congestion-free arrival and departure. The infrastructure is also perfect, and because short trips are the very lastest, a lot of tourists come to this region even out of season because of the proximity to France and to the international metropolis Barcelona. The Dalí-triangle with its 3 museums (Figueres, Púbol, Portlligat) is the most visited museum of Spain, after the Prado in Madrid.

The famous graded restaurant El Bullí near Roses is getting converted by Ferran Adrià into a design and culture center of international importance. Pretty soon it should make great headlines. Those who know how to benefit from the expected media excitement and stream of visitors, can definitely generate additional publicity with an extraordinary idea.

Roses
Roses was a fisher´s village until the fifties. Then the tourism boom started on the Costa Brava. With tourism the village expanded. Nowadays the urbanisation reaches way out of Roses. Mountains and the surrounding bays became the summer domicile for many people from the city and Northern Europe.
In Roses live about 15.000 inhabitants permanently, among those many foreigners, who have found a livelihood or spend their pensionist days here. During the summer the amount of inhabitants in town rises to approximately 90.000. Then there is a lively atmosphere on the beaches and in the small bays of Roses.
There is an unbroken demand for real estate on the steep hilly sides of Roses.
The wild coast scenario of the bay of Roses is best seen from the lighthouse by foot on “Camí de Ronda”.
The lighthouse of Roses was equipped with a 500 watt light in 1921. 38 metres away from the sea, his light shines night after night near the rock “La Bateria”. The lighthouse is situated a little beneath the fortification of Trinitat a military installation from the 16th century, which is being restored at the moment.
Just off the coast of Canyelles Petites a small island, built from different cliffs, the so-called Brancs, juts out from the sea. Seagulls and cormorants dry their feathers here in the sun. Within the Canyelles Petites you can find the only 5 * Hotel of the Northern Costa Brava- the Vistabella with its exquisite restaurant “Els Brancs”.
Between the Canyelles- and the Almadrava-beach two rocks reach into the sea- the Punta de l’Omella and the Punta de l’Ullastrelt.
The final destination on our small hike is the bay of Almadrava with its 400 metres long sandy beach. Almadrava or in Spanisch Almadraba is the expression for a special fishnet, which is used for the fishing of tuna. 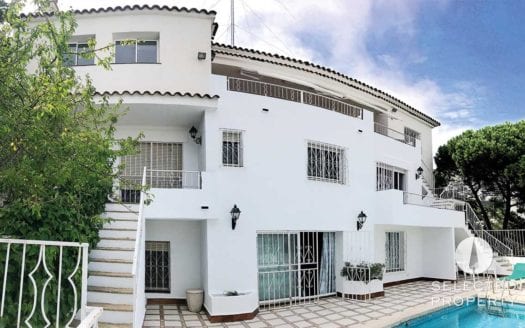 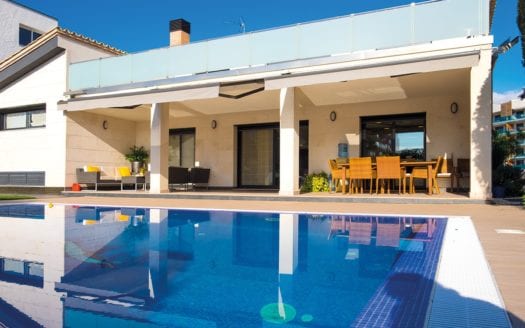 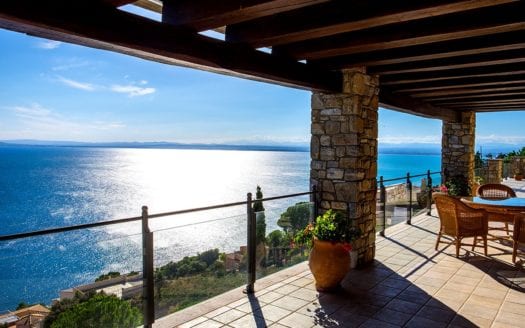 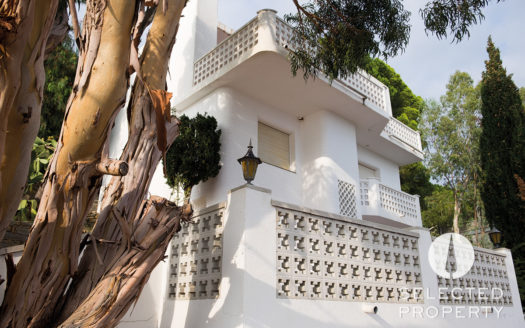 House with sea views in a fantastic location...